The reality of returns on angel investment

Editor’s note: This was originally a question and answer on Quora, but the community response was so significant we decided to syndicate it on our Gust blog.

Q: If I want to invest $5,000 as a new angel investor into a new company or companies as part of an angel syndicate, what chances do I have of making a profit in 5 years?

A: “Very, very slim” to “almost negligible” if you’re talking about investing in one startup, increasing to “slim” if the syndicate invests into a dozen or more startups.

I know I’m going to draw the ire of some of the angel crowd, most of the entrepreneurial crowd and all of the crowdfunding crowd with this response, so it’s important to back it up with an explanation, namely:

A majority of all new, angel-backed companies fail completely, so if you invest in only one company, the odds are that you will LOSE ALL YOUR MONEY, not just “not make a profit”.

Several studies and mathematical simulations have shown that it takes investing the same amount of money consistently into at least 20–25 companies before your returns begin to approach the typical return of over 20% for professional, active angel investing. This means the greater the number of companies into which the angel syndicate invests, the greater the likelihood of an overall positive ROI. [1] 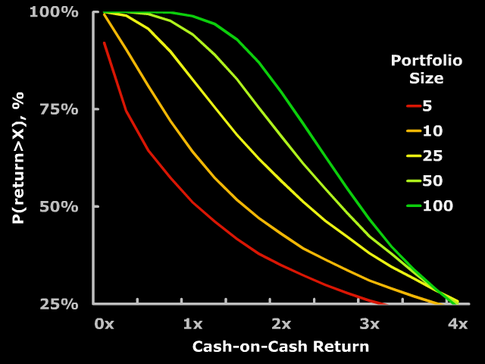 I realize that this all sounds very depressing, and makes one wonder why on earth anyone would ever become an angel (good question, actually)! But the answer to that lies precisely in all of the cautions above:

Then (and only then) will the odds be in your favor for you to join the relatively rarified band of successful, professional angel investors who show average IRRs over their investing years of over 25% per year. 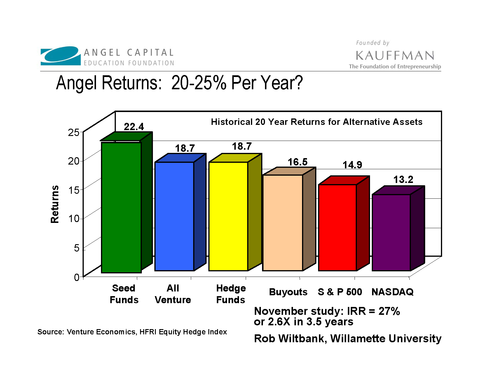 David has been described as "the Father of Angel Investing in New York" by Crain's New York Business, & a "world conquering entrepreneur" by BusinessWeek. He is a serial entrepreneur & Inc 500 CEO who chairs New York Angels, one of the most active angel investment groups. David is also CEO of Gust.

2 thoughts on “The reality of returns on angel investment”