Is the Startups Buzz Dimming?

Is the bloom off of the startups rose? Two days ago the New York Times published this story about investors getting pickier. 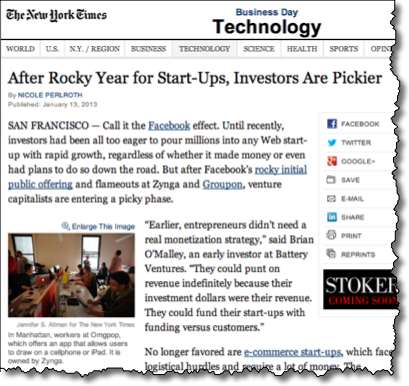 I think the NYTimes’ headline is slightly off from the story’s content. It’s not that much about a rocky recent past; it’s more about money being too easy in the recent past, and now, as a natural result, things get tighter because “easy” money doesn’t always mean enough of the due diligence and thought to make good deals.

This is what I hear from my own sources. I had a conversation over the weekend, before either of us had seen the NYTimes story, about startups going down, even giving back investors’ money. The gist of it was that money had been too easy.

Despite its headline, the story quotes several people along those lines, For example:

Earlier, entrepreneurs didn’t need a real monetization strategy,” said Brian O’Malley, an early investor at Battery Ventures. “They could punt on revenue indefinitely because their investment dollars were their revenue. They could fund their start-ups with funding versus customers.

Part of the problem is simple math. Angel investors seed businesses with small sums, often less than $1.5 million. But to grow a business, entrepreneurs eventually have to solicit financing from the venture capitalists who invest on behalf of endowments, pension funds, foundations and the like. And while the number of angels eager to write checks has increased, the number of active venture capitalists has decreased.

And my favorite, indicating a classic reality check:

The realities of building an enduring business are starting to sink in. “It has never been easier to start a company, and never harder to build one,” said David Lee, a venture capitalist at SV Angel, an early-stage investment firm.

One group that doesn’t lose, in this scenario, is the subset of startups funded in 2012 that have launched successfully and are doing well. The view is always better from the eyes of a head standing up above the rest of the crowd.

What do you think?