Steve Blank has a good post today called Failure and Redemption, which he introduces with this: 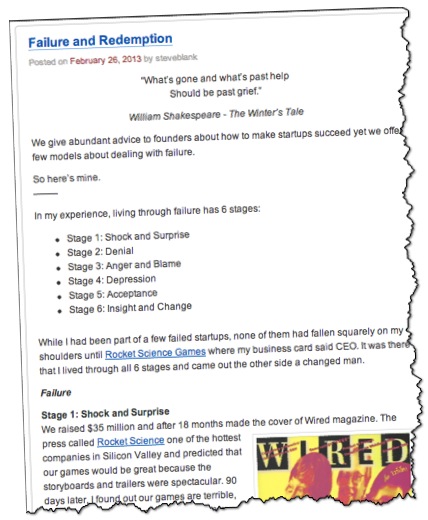 We give abundant advice to founders about how to make startups succeed yet we offer few models about dealing with failure. So here’s mine.

Steve’s experience was Rocket Science Games, which raised $35 million and a cover story in Wired Magazine before failing. He writes about shock, denial, anger, blame, depression, acceptance, and, finally, insight.

At least it was clear and present failure. Very visible failure with the big raise, big press, and then the big crash at the end.

Not one of those much-more-common long drawn-out failures that end up taking years of slow quicksand-like decline.  Lots of smaller raises, pivots, restructuring, clinging to hope, and frustration. With no real path to success but no exit either.

Not having the option of continuing can be a blessing. Take the write-off, swallow hard, and do something else. Persistence and perseverance can be overrated.

With all the news about hundred-million-dollar rounds and billion-dollar valuations, it can be hard not to look at the world of entrepreneurship and angel investing as a thrilling ride that only has one stop: success. But to be a successful entrepreneur or serious angel investor, you must have a realistic understanding of the startup failure rate and internalize that, in

This is a grim fairy tale about a mythical company and its mythical founder. While I concocted this story, I did so by drawing upon my sixteen years of experience as a venture capitalist, plus the fourteen years I spent before that as an entrepreneur.  I’m going to use some pretty simple math and some pretty basic terms to create

Many entrepreneurs seems to be convinced that the “crowd” of regular people using the Internet will somehow solve their startup funding needs, when they sense a lack of interest from accredited investors. Professionals maintain that there is plenty of money and equity for qualified startups, and funding marginal startups via any source will only make more people unhappy.

What is the worst startup pitch ever?

Take your choice (these are both real, honest-to-God pitches, and I’ve got the originals in my possession):

Contestant A CluelessCo is an internet startup company seeking $2 million of equity financing to fund our company for at least one year. CluelessCo will become the main consumer outlet for the internet, digital cable and satellite TV, and cell phones and PDAs.

10 Ways To Kill A Growing Business With Bad Hires

Every startup with any traction quickly reaches a point where they need to hire employees to grow the business. Unfortunately, this always happens when pressures are the highest, and business processes are ill-defined. At this point you need superstars and versatile future executives, yet your in-house hiring processes and focus are at their weakest.

The result is a host of