A Quick Reminder of the Roots of Angel Investment

I just picked up on a great reminder of how “it all” got started: Gordon Moore and eight others formed Fairchild Semiconductor in 1957, and how that led to the model for outside investment:

Little to anyone’s knowledge at the time, how it was formed would set the model for almost every Silicon Valley company that would follow it; unleashing a wave of innovation that continues to this day. Besides inventing the first practical microchip, Fairchild was also the first venture backed startup. 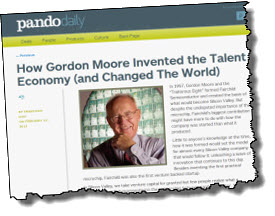 Most of us grew up taking the idea of the investment path for granted. By the time I got into the Silicon Valley tech world, in the late 1970s, the model was pretty solid. By the time I started with a San Jose high-tech planning and consulting firm in 1981, I and every consultant I worked with was focused on developing my product, and my business plan along with it, and getting funded.

Which reminds me of those early days at Comdex, in the early 1980s, when every founder who could scrape up the money would take a booth at Comdex and pitch the great new idea. The booth was like the lottery ticket: buying into the dream. It gave us the magic of “what if.”

Here’s more from that post, which, by the way, is from How Gordon Moore Invented the Talent Economy and Changed The World on PandoDaily:

The result of this inverted capital system is that the risk for entrepreneurs has largely been removed. Entrepreneurs in Silicon Valley love to talk about how they are different than the rest of the world because they are “pirates” and have a greater tolerance for risk, when in reality the bulk of the risk has simply been transferred to the venture capital LPs. Despite the smaller amount of money at play, a family who mortgages their home to open a restaurant has taken a far bigger relative risk than most entrepreneurs in the Valley. The difference is they don’t benefit from living in a talent driven economy where capital is willing to gamble on them.

And that is what we’re doing, still, 55 years later, at gust.com specifically, and with angel investment in general. We’re not quite as rarified as the true venture capital because the distinction between angel and VC money is that it’s our own money. When it works, everybody wins.

All opinions expressed are those of the author,  and do not necessarily represent those of Gust.